How to Respond to People with Offensive Values

Freedom means encountering people and values that make you uncomfortable. As a new chaplain, I was told not to use Hebrew when giving a public prayer. I thought the person giving me this instruction was hypersensitive or bigoted. Latin didn’t bother me. Why should Hebrew bother others? I could have protested. But to what end? It would have offended people. And I would have lost any chance to impact their lives. Parshas Chayei Sarah gives a tried and true method for handling this situation:

“…also for your camels I will draw until they finish drinking.” (Beresheis/Genesis 24:19) 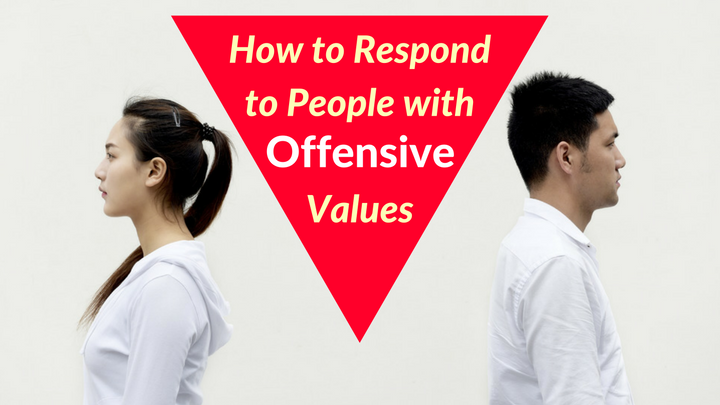 This Sabbath’s parsha begins with Sarah dying. Abraham purchased a burial site, interred her, and devotedly mourned. Next, he ordered Eliezer, his servant, to find a wife for Isaac. Abraham remarried. The narrative concludes with his death and the death of Ishmael.

Consider what Abraham knew about his neighbors. G-d brought the flood because most people robbed or committed sexual immorality. He lived during the time of the Dispersion when people challenged G-d’s authority with the Tower of Babel. After she gave birth, Hagar mocked his beloved Sarah’s barrenness. Efron the Hittite grossly overcharged him for a burial site even as he grieved over his wife’s death.  He probably knew that Cain murdered Abel.

Not a pretty picture.

Abraham rejected his neighbors’ values. But he did not run around protesting them. Nor did he engage in heated words or provoke them. He wore mourning garments. But only because his wife died not to show he abhorred other people's values. He continued to live his life.

Abraham knew he could not change anyone’s behavior or beliefs through confrontation or insults.

Nothing has changed in the last four millennia. You will not change anyone’s mind by offending him. You’ll only harden his position.

Secure the Next Generation’s Values

Abraham took action too. He redoubled his effort to ensure Isaac would keep his values. Eliezer received specific instructions about a suitable wife for his son and heir.

Eliezer set out for Abraham’s homeland. On arriving there, he decided the proper young woman must offer to alleviate his thirst, then that of his camels. Deep sensitivity to animal welfare does not necessarily indicate a similar attitude toward humans. But someone who responds to the needs of a stranger and then even his animals is a paragon of kindness.

Along came Rebecca. Her brother was one of the greatest liars in history. So sensitive was she to honesty, Rebecca said she would draw water for his camels. Her words implied she could not be sure they would drink. Though surrounded by selfishness and deceit, she remained virtuous. Rebecca’s strength of character qualified her as co-heir to Abraham’s legacy.

Together, Isaac and Rebecca would ensure G-d’s morality endured despite their neighbor’s depravity.

Without demonstrations, insults, or threats of withdrawal, Abraham stayed the course. As a result, his values have survived for over 4,000 years. Most of humanity continues to reject those of the Canaanite nations.

You have two choices when people’s values offend you. Abandon your own by attacking those you disagree with. Or adhere to them more closely. Become an even more shining example of how good they are. Be more diligent about teaching them to your children. Then have faith that G-d will see to their endurance.

Question – How do you engage with people whose values offend you?


Bible God healthy relationships spiritual growth
This entry was posted on Wednesday, November 23rd, 2016 at 03:30 and is filed under Ethics & Values, Relationships, Scripture. You can follow any responses to this entry through the RSS 2.0 feed. You can skip to the end and leave a response. Pinging is currently not allowed.

4 thoughts on “How to Respond to People with Offensive Values”