Why You Should Care that Gene Wilder Died

Celebrities don’t interest me. I don’t aspire to live a life like theirs. Parties, jet-setting, and awards shows leave me cold. Most of the reporting about them falls into the category of gossip. Outwardly their lives appear glitzy. But the times I’ve seen the inside, they seem, like Thoreau’s “mass of men,” to “lead lives of quiet desperation.” That being the case, why should you care that Gene Wilder died? Let me tell you a brief story. 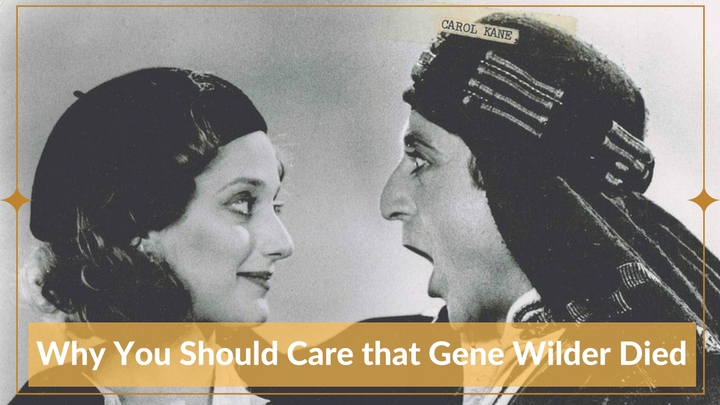 The Test of Character

On a November weekend in 1977, my friend Rose Anna and I decided to attend a preview screening of The World’s Greatest Lover. We went to the long since demolished Plitt Theatres in Century City. Rose Anna is Gene Wilder’s most ardent fan. She loved him so much she never begrudged his love for Gilda Radner.

We were sitting in the theater waiting for the movie to begin. All day I had teased Rose Anna about Gene Wilder showing up for the screening. She pooh-poohed the idea. While waiting for the lights to dim, I sat facing the back of the theatre so I could watch people enter. (Note: 30 years ago movie theaters were like regular auditoriums. You could see the whole house.) About 10 minutes before show time I shocked her when I let her know he had just walked in.

Not one to miss an opportunity, I told Rose Anna we had to go and introduce ourselves. She declined. I pressed her. She absolutely refused. Undaunted, I made my way to where he was sitting, begged his pardon for intruding, and said hello. Mr. Wilder could not have been more gracious. He stood up, shook my hand, thanked me for coming to see him. I told him about my friend and asked if it would be all right for me to bring her by after the movie. He said he’d wait for us.

After the lights came up and most of the crowd had left, there he was, still in his seat, waiting, just like he promised.

I brought Rose Anna over to him. Again he stood, gently took her hand, and thanked her for coming by. She was literally speechless. Then he looked her right in the eye, smiled, and told her, I love your tailor. Rose Anna was wearing a shirt she had made that said, “I'd Rather Be Watching a Gene Wilder Movie.” That broke the ice. We all laughed. And Rose Anna hugged him. Throughout, Mr. Wilder was kind, gentle, and warm.

Gene Wilder was a Mensch

If you’re unfamiliar with Yiddish, a mensch is an honorable person. The term can apply to Jews and non-Jews alike, so my assessment has nothing to do with Mr. Wilder being of my faith. Rather, despite his fame and success, it appears he lived his public and private lives with integrity and decency. His longtime collaborator, Mel Brooks, often said so in spite of their creative differences.

Gene Wilder was lucky to play beloved characters like Willy Wonka and Dr. Frankenstein. He was fortunate to find an epic love with his wife Gilda Radner. But he was challenged by the whirl of Hollywood and his wife’s painful death at a young age. Can you claim a less equitable mix of blessings and curses?

In the sweep of his life, Rose Anna and I were nothing. Two fans among millions. But Gene Wilder treated us as if we mattered a great deal. In this, he displayed the essence of what it means to be human. Every individual is significant. And we must treat each of our fellow human beings so as to acknowledge that significance.

Throughout it all, Gene Wilder remembered this central reality. In his last act of service, he imparts to you his example. There are no “little people” in your life. Until you can treat the most annoying person you know with respect, remember how Gene Wilder treated Rose Anna and me. I will.

How do you stop yourself from being irritated by bothersome people? Please comment below.


character traits spiritual growth wisdom
This entry was posted on Sunday, September 4th, 2016 at 03:30 and is filed under Ethics & Values. You can follow any responses to this entry through the RSS 2.0 feed. You can skip to the end and leave a response. Pinging is currently not allowed.