Are You Using Authority Wisely?

My seven-year-old daughter surprised me not long ago with the depth of her perceptiveness. Now, I have to revise my thinking about her as too young to wrestle with complex issues. Parshas Vayechi gives me the model:

“And I buried her there on the road to Ephrath, it is Bethlehem.’” (Bereshis/Genesis 48:7) 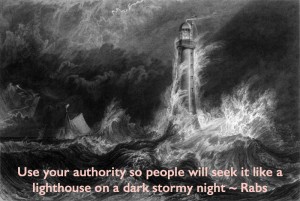 This Sabbath’s parsha, concluding the book of Genesis, begins with Jacob becoming ill. With death imminent, he appeals to Joseph not to bury him in Egypt, but back in Canaan with Abraham, Sarah, Isaac, Rebecca, and Leah in the cave of Machpelah. Jacob blesses Joseph’s sons Manasseh and Ephraim, elevating them to the status of his sons. Then he blesses his own sons, though some of the blessings sound more like rebukes.

All of Egypt mourns Jacob, testifying to his greatness. The immenseness and grandeur of his burial procession impress and scares the Canaanites. After his father’s death, Joseph assures his brothers he forgives them. He lives to see his great-grandchildren. Before he dies, Joseph asks his brothers to bring his bones with them when G-d brings them out of Egypt.

The stage is now set for the enslavement of the Children of Israel and their redemption.

The greatest power of the time, Egypt, acknowledged Jacob’s greatness, evidenced by his funeral. So why did he feel compelled to insist Joseph swear to fulfill his burial arrangement? To be sure his son was the second most powerful man in Egypt, and hence the world. Undoubtedly he was a busy man. Still, why would this cause Jacob to think Joseph could violate the commandment to honor his father?

Rather than burying her where he and Leah would eternally rest, Jacob interned her in a tomb outside Bethlehem. As he confesses, he did not even bring Joseph’s mother into the town. Jacob sensed his son harbored lingering resentment over Rachel’s burial.

By way of apology, Jacob informs Joseph that G-d directed the location of Rachel’s tomb. The Almighty showed him a prophecy that at the time of the Babylonian exile future generations of Israelites would pass by it. As told in Jeremiah 31:15-17, Rachel wept for their plight, eliciting G-d’s mercy.

On death’s doorstep, Jacob could have laid down the law, knowing Joseph would obey. Instead, he took the time to convey his wish compassionately, seeking understanding and reconciliation.

Tweet this: Wise People Use Authority to Strengthen Relationships

In the military, intelligent commanding officers rarely order their subordinates around outside of combat. They know such behavior is counterproductive to encouraging the initiative, resourcefulness, and loyalty necessary for unit success.

You can require obedience from your children. In a dangerous situation, this may be appropriate. But creating a lifelong, loving relationship requires openness and engagement. Equipping them with the tools they need for success in life means addressing their needs and feelings. Even when the stakes for you are high, and your time is short.

Question – What suggestions do you have for instilling parental respect in your children while creating mutual understanding?


Bible God leadership spiritual growth
This entry was posted on Wednesday, December 31st, 2014 at 03:30 and is filed under Scripture. You can follow any responses to this entry through the RSS 2.0 feed. You can skip to the end and leave a response. Pinging is currently not allowed.

Cancel Reply
« 10 Books that Will Improve Your Life
You Made 2014 Fantastic. Thank You! »