I work on a military base, where even civilians have a dress code. The neighborhood in which I live has a high concentration of traditionally religious Jews and members of the World War II generation. Neither challenges conventions of dress. So when I venture into the “outside” world, like my once a week shopping at Trader Joe’s or taking my family to Knott’s Berry Farm, I feel like an alien. It seems at least one Scriptural lesson, in Parshas Vayeishev, no longer applies:

“And Judah saw her and he considered her for a harlot because she covered her face.” (Bereshis/Genesis 38:15). 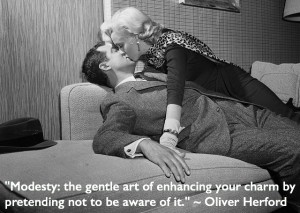 In this week’s parsha we learn about Joseph’s prophetic dreams; his brothers selling him to a caravan that takes him to Egypt and sells him into slavery while letting Jacob think he is dead; the story of Judah and his daughter-in-law Tamar; Joseph rising to run Potiphar’s household and eventually being jailed though the slander of Potihpar’s wife; and Joseph being the conduit for the interpretation of the Chief of Butler’s and Chief of Baker’s dreams.

The stage is being set for the Israelite’s sojourn in Egypt.

Judah found Tamar sitting at a crossroads but did not recognize her? Even assuming her face covering was similar to a niqab or burka that Muslim women wear today, it defies credulity that he did not know her by sight. But Tamar was so modest she always kept her face and hair covered even while in her father-in-law’s home. Judah never saw her “undone.”

Consorting with her father-in-law appears immodest, even downright salacious. But doing so corrected Judah’s sin. By preventing his youngest son from performing levirate marriage with her, Judah deprived Tamar of her role in establishing the Jewish monarchy. When she righted his wrong, Tamar merited having great descendants including King David and King Solomon.

Compare Tamar with Joseph, who allowed himself to be in Potiphar’s house without another man present. As a result, he appeared guilty of having relations with his master’s wife. While the charge was false, acting immodestly in his daily behavior lent credibility to the accusations. In the end, Joseph was jailed and his descendants are among the ten lost tribes.

In today’s world ever more plagued by skimpy clothes, profane language, and vulgar behavior Tamar’s modesty appears reactionary, lacking in freedom of expression. Yet Sheryl Sandberg, a woman of modest dress and language, is among the most influential people in the world. Through governing her behavior and appearance, she opens up vistas of achievement by forcing the business world to grapple with her ideas and acumen.

No one lives a life free in all aspects. There isn't time to free yourself from all social convention. The question becomes: Where will focused freedom of effort most advance your life? Will immodesty further your personal development or become a barrier to the freedom to tackle this crucial aspect of life?

Question – What benefit do you find in immodesty?


Bible character traits God spiritual growth
This entry was posted on Wednesday, December 10th, 2014 at 03:30 and is filed under Scripture. You can follow any responses to this entry through the RSS 2.0 feed. You can skip to the end and leave a response. Pinging is currently not allowed.