Shrewd Advice About People Who Thwart Your Success

How to Deal With Nasty Coworkers

Without naming names, I'd prefer not to have worked with some of the chaplains in the navy. They caused me no end of career difficulties. I’ve joked that the UCMJ needs a new article called Conduct Unbecoming a Chaplain. But Parshas Ki Sisa gives shrewd advice for handling the situation:

“And Moses stood at the gate of the camp, and he said, whoever is for G-d come to me. And all the sons of Levi gathered to him.” (Shemos/Exodus 32:26) 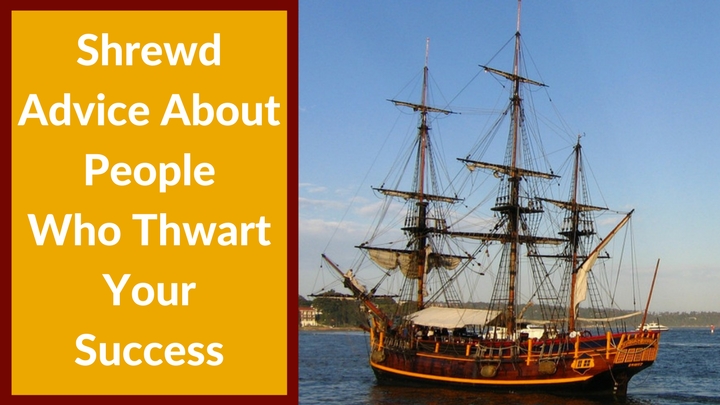 This Sabbath’s parsha gives the mitzvah of the half-shekel. Then it deals with the last few items for the Altar. Next, it discusses observing the Sabbath. The parsha ends with the story of the Golden Calf.

The Torah emphasizes every single Levite came to Moses’s aid. Even Korach answered the call. This despite his deep envy of Moses and Aaron. His jealousy was so consuming it led him to mutiny against these leaders chosen by G-d.

Yet even though Korach hated him, Moses welcomed him into the fight for the Almighty’s honor. And he fulfilled his duty to the letter. Those responsible for the Golden Calf received their deserved punishment. Only later did Korach and his followers mutiny.

The same tactic didn’t work for Captain Bligh of the ill-fated HMAV Bounty. He asked his acting lieutenant, Fletcher Christian, to help him discipline a restless crew. Christian displayed little enthusiasm. He concluded Bligh’s honor, not that of King, country, or G-d was at stake. So Christian hastened the mutiny.

Both Korach and Christian felt persecuted by the man in command. Unable to blame G-d, Korach condemned Moses and Aaron for taking the position he coveted. He couldn’t content himself with being among the elite Levites. He had to be number 1.

Despite his portrayal in popular culture, little evidence exists that Bligh mistreated his sailors. The disciplinary measures he used were common in their day. And his authority came from the King of England. Regardless of Bligh making him second in command, Christian felt abused. Unwilling to hold himself responsible, he blamed his unhappiness on Bligh.

Moses and Bligh displayed exemplary leadership. Moses led the Children of Israel out of Egypt to the border of the Promised Land. Bligh navigated a tiny boat through an open sea voyage of more than 4,000 miles. At first, both overlooked the errant tendencies of their restive subordinates.

In the end, as the mutiny leaders sowed, so they reaped. Unable to persuade the mutineers to abandon their cause, Moses had to ask G-d to destroy them. The ground opened up and they perished. Korach, who punished those responsible for the Golden Calf, received the same.

Christian seized the Bounty and set Bligh and most of those loyal to him adrift. Yet later, as the leader of the mutineers on Pitcairn Island, those unhappy with their lives murdered him.

During your job-hunt and on the job you’ll encounter people who will appear to be allies but later turn out to be mutineers. Such people are the exception, not the rule. Korachs and Fletcher Christians are rare. Best to follow Moses’s and Bligh’s example. Show them your good faith. Try to convince them to rejoin your cause.

But if such efforts fail, take heart in the lesson of Korach, Christian, and other mutineers in history. They get their rightful reward. Establish new relationships. And move on with your career.

Question – Is it appropriate to work with a bad or evil person on a worthwhile project?


Bible decision making God Judaism Old Testament religion right decision spiritual growth wisdom
This entry was posted on Wednesday, March 15th, 2017 at 03:30 and is filed under Scripture. You can follow any responses to this entry through the RSS 2.0 feed. You can leave a response, or trackback from your own site.