Why Money Is Not the Root of All Evil

Having been an entrepreneur for most of my life except the six years I spent on active navy duty, I have been through prosperous and lean years. During the lean ones, temptation to do business with lower quality people increased. If only I had taken Parshas Lech Lecha to heart: 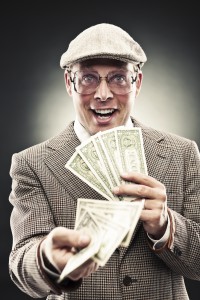 In this Sabbath’s parsha we read that Abram, later to be Abraham, is told by G-d to leave his land and relatives to go to the land to which he is directed. Next, he sojourns in Egypt then returns to the Land of Israel. Abram and his nephew Lot part ways, G-d promises Abram that the Land of Canaan will be given to him and his descendants and Abram wins a war in which he rescues Lot then turns down the booty that normally goes to the victor.

Next G-d reiterates His promise to give the Land to Abram and his descendants, Sarai, later Sarah, gives Abram Hagar for a wife, G-d and Abram make the covenant of circumcision, and Sarai and Abram are given new names and are promised a son who will be named Isaac.

Amidst the narrative of the War of the Kings is a seemingly straightforward exchange. The king of Sodom offers Abram a deal whereby he will take the people captured in the war and Abram will take the wealth. Abram replies with the above verse adding that aside from food for his soldiers and their share of the booty he will take nothing so that the king of Sodom cannot boast he made Abram rich.

Pretty clear cut, no? Then why did Abram accept riches from Pharaoh?

“Nem de gelt” is a Yiddish expression that may still be heard in business circles. It means, “take the money.” For many it is the philosophy by which they live their lives. Surely in Abrams case, having just defeated a much larger enemy force, he was entitled to the customary spoils of war.

But at what cost? Having been enriched by the war Abram might have been accused of being a war profiteer. Worse, his enemies might have said that Lot being captured was merely a ruse de guerre, an excuse for Abram making war merely to gain the wealth of the defeated kingdoms.

The crime for which G-d will punish the Egyptians, cruelty inflicted on the Children of Israel as opposed to ruthlessness inherent to their society, will not happen for several more generations. At this point they are innocent. But in the next parsha, G-d holds Sodom accountable for its immorality, manifest during the War of the Kings.

Charities struggle with the question of whether to accept donations from people convicted of crimes, risking being tainted by association. Abram wanted no such stain on his reputation. He valued it and his relationship with G-d too highly. Money is not the issue, rather the values of the people potentially doing business.

Prosperous or lean, the standard for transacting with people should remain high. When the opportunity for financial enrichment comes your way will you investigate the people involved and their activities? Or will you nem de gelt?

Question – How do you determine whether to be involved with someone?


Bible character traits God spiritual growth
This entry was posted on Wednesday, October 29th, 2014 at 03:30 and is filed under Scripture. You can follow any responses to this entry through the RSS 2.0 feed. You can skip to the end and leave a response. Pinging is currently not allowed.