How to Stand Out When Comparing Yourself to Others

You hear it all the time. Don’t compare yourself to others. Such advice sounds so good. “You’re unique.” “The only real contest is the one you have with yourself.” Yeah, yeah, talk to the hand. If you’re a competitive person, winning matters. So you have to measure yourself against others so you know whether you'll stand out. Parshas Noach explains how to do so effectively:

“…Noah was a righteous man, perfect in his generations.” (Genesis/Bereishis 6:9) 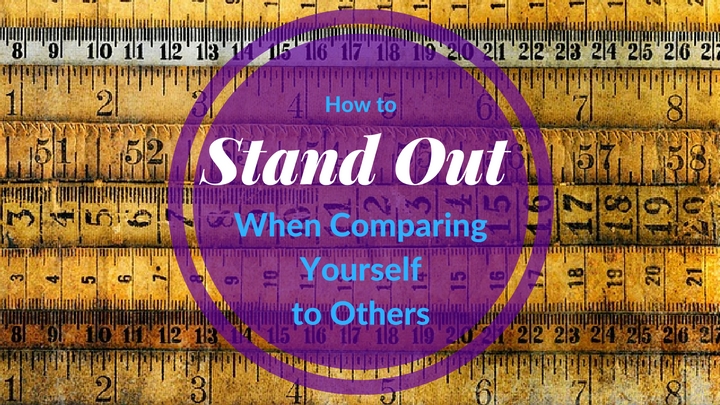 The parsha for this Sabbath is Noach. G-d chooses Noah to save humans, animals, birds, and creeping things from destruction in the flood. Rain falls for 40 days and nights. The waters churn for another 150 days. After they recede, Noah brings an offering to G-d. Then he degrades himself by planting a vineyard and getting drunk on wine. As a result, we learn the true characters of his sons.

Next, the parsha lists Noah’s descendants who formed the 70 nations. Then, as a result of building the tower of Babel, the Almighty disperses the nations. It ends by recording the ten generations from Noah to Abraham.

Is Noah Praiseworthy or Not?

Does the Torah give a favorable account of Noah? If you’re not sure, never fear. Bible commentators have argued about it for millennia. Some view Noah’s righteousness as praiseworthy. Even if he had been in a generation of virtuous people he would have been among the greatest. Others conclude if Noah had lived during the generation of Abraham he would have been insignificant.

After thousands of years, wouldn’t you think that we’d have a definitive verdict about Noah? Why the ambiguity?

God wants it that way. He has plan for how you should compare yourself to other people.

When you base your standard of performance on others, the yardstick constantly changes. You’re subjected to what society and history think in the moment.  You may look great if your contemporaries or successors were lousy people. But if they’re stellar performers, you may look bad. There goes your self-esteem.

Instead use an unchanging standard, God and His Torah. That way you have a lofty goal to aim at. You’ll always have room for self-improvement. Each day, note your progress. How did you behave or perform better today than you did yesterday?

Make no mistake. Competition is good. But when people think their performance or behavior is superior to others, they tend to get conceited. Or they feel defeated when they do not measure up. Both are counterproductive to steady improvement.

When comparing yourself to others, look for an admirable trait or the kind of success you desire. ‘Examine how the person got it. Then copy what he did. At the same time, keep in mind others are comparing themselves to you. What kind of example are you? Knowing people model your behavior can motivate you to improve.

The disagreement about Noah’s character points out a key choice you need to make. Are you striving to be better than the people around you? Or are you aiming to stand out because the quality of your character transcends the generations?

In such a competitive society like ours, how do you capitalize on its benefits while maintaining your integrity?


Bible God mental health spiritual growth
This entry was posted on Wednesday, November 2nd, 2016 at 03:30 and is filed under Resilience, Scripture. You can follow any responses to this entry through the RSS 2.0 feed. You can skip to the end and leave a response. Pinging is currently not allowed.