I still shudder when I think about the consequences of challenging my parents, especially my father. Suffice it to say when he asked me to do something he expected it to be done, no preliminaries and no discussion. I thought this was the natural order of life until reading Parshas Yisro: 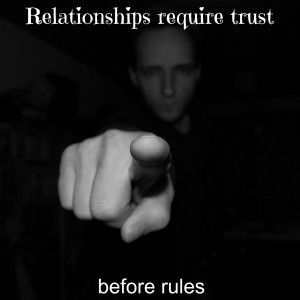 In this Sabbath’s parsha Moses reunites with his father-in-law Yisro or Jethro, a Midianite priest who heard about the wonders G-d performed for the Children of Israel. He outlines a leadership plan that Moses adopts. His reward? A parsha is named after him - in Biblical terms, this is like appearing on the cover of Rolling Stone Magazine.

After Yisro departs, the Israelites arrive at Mount Sinai where they accept the Torah and prepare themselves to receive the Ten Commandments. Rashi and the Rambam explain they heard all Ten Commandments in one instant but could not comprehend them. So G-d repeated them. But after the first two they were so overawed they begged Moses to intercede and teach them the other eight.

Have you ever noticed how people give advice to someone who did not ask for it, is not listening, or does not care?

Why should you listen to someone merely because he thinks he is smarter or more experienced than you? And why should anyone listen to you merely because you think you know better? Any good salesman knows before a sale can be made the customer first has to develop trust.

Parents are tested here. Sometimes children trust their parents, doing what they suggest, while other times they claim to trust them but do not listen to, let alone take, their advice. In such cases, perhaps children are saying credibility must be re-established. Rarely do humans trust permanently, implicitly. Why would it be different between children and parents? Would such an attitude serve them well when they are adults? Surely they’re better prepared for life by dealing with the ebb and flow of trust.

G-d shows you the proper way to influence children. The first commandment, above, does not look like a commandment at all. Rather the Almighty reminds you He is your loving creator and redeemer. Then He gives the rules. G-d prefaces many mitzvahs with a reminder of His affection and intimacy.

A story is told of a rabbi who was in his study when in walked Berl, the town pickpocket, who says, “Rabbi, I was walking down the street and found this wallet lying on the ground. I know that returning lost objects is a mitzvah of the Torah, so I brought it here. Will you make an announcement in the synagogue and find its owner?” The rabbi sees there is a good deal of money in the wallet. So inspired is he at Berl's repentance, he hugs him and congratulates him on his reformation. Later, the rabbi realizes his gold pocket watch is missing. He calls Berl and asks him if by chance he may have inadvertently picked it up. Berl confesses to the crime. “I don't understand you, Berl. You find a wallet full of cash in the street and you return it, then you steal my watch?” Berl answers, “Rabbi, a mitzvah is a mitzvah, but business is business.”

Before you give advice or set rules, take the time to establish, or re-establish, your credibility. Otherwise, you risk being hoodwinked into believing your counsel was internalized when it fact, like Berl, no such change of heart has occurred.

Is there a time when you should just give an order expecting it to be obeyed?


Bible God healthy relationships spiritual growth
This entry was posted on Wednesday, February 4th, 2015 at 03:30 and is filed under Relationships, Scripture. You can follow any responses to this entry through the RSS 2.0 feed. You can skip to the end and leave a response. Pinging is currently not allowed.