Do You Actually Want What You’re After?

Not long after my family moved to Dallas, Texas, when I was about six years old, I became friends with an older kid who lived down the street. One afternoon when we were hanging out together he suggested we go throw rocks at the windows of a new house being built not too far away. Shrimp that I was, the rocks I threw often did not have sufficient force to break the windows. But that was okay with me. I felt awful the whole time. 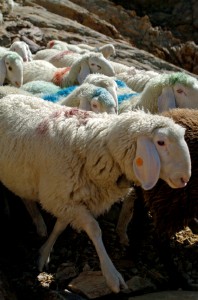 Thank goodness as adults we are better equipped to resist peer pressure. Asked to participate in vandalism, we would decline.

Thinking about this idea over the last few weeks, I thought about how people respond to opportunities. Asked if they want to appear on television, I imagine most people would respond along the lines of, “Who wouldn’t!?”

Notice anything strange about this reply? Someone saying it is expressing a consensus desire, not his own.

Given how often average people are presented in a humiliating way on television, I am skeptical about the benefit of appearing on the small screen (can we still call it that now that large flat screens rival some of those at multiplexes?). And while this example may be too abstract, most of us feel more pressured by our peers than we like to acknowledge. Think about the pursuit of youth by the middle-aged, the desire for an image of prosperity by those who cannot afford it.

As much as the conformity of the 1950s is derided, it may well have been a genuine expression of post World War II desires. The vast majority of men and women who fought and lived through the war did so while longing to return to their spouse, or get married, settle down and have a family.

As you head toward the end of the year and start evaluating your progress I encourage you to consider whether you genuinely desire what you are pursuing or have a case of “Who wouldn’t!?”

Where do you find yourself at variance with what people typically strive for and what you want?


goal setting mental health right decision success
This entry was posted on Sunday, November 9th, 2014 at 03:30 and is filed under Resilience, Transitions. You can follow any responses to this entry through the RSS 2.0 feed. You can skip to the end and leave a response. Pinging is currently not allowed.